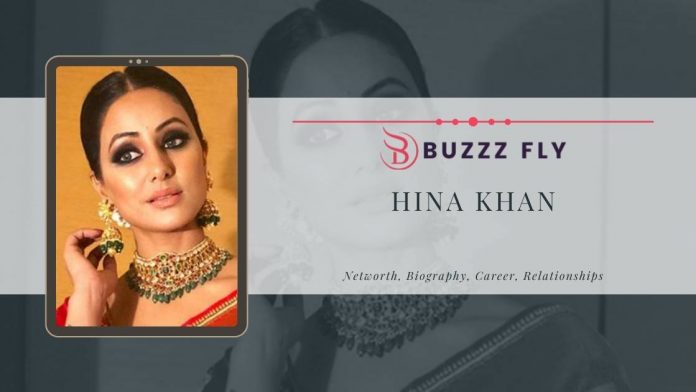 Hina Khan Net Worth: Television star Hina got popularity and became a household name after playing the role of ‘Akshara’ in the Star Plus serial ‘Yeh Rishta Kya Kehlata Hai’. No doubt, she is a good actor and model. Along with this, she was also seen in reality shows like Big Boss 11, Fear Factor. It’s her outstanding talent and handwork that she is among the highest-paid actress in the television industry. Here we will reveal Hina Khan Net Worth and discuss about her biography

This top performer of the industry was an average student at the school. She did her schooling in Srinagar. For her Master’s degree (MBA), she joined Colonel’s Central School of Management (Gurgaon). She wanted to become a journalist or air hostess. But destiny has chosen something different for her and she landed in the entertainment sector.

In the year 2009, Hina was first seen in the showbiz industry as a guest appearance on the show ‘Kayamath‘.

Also, she had given special appearances in hit shows like ‘Chand Chupa Badal Mein‘ and “Sapna Babul Ka…Bidaai‘. Again in 2011, she was seen as a guest in the cooking show ‘Chef Pankaj Ka Zayka‘.

The girl has really worked very hard to reach this stage. She started her acting career from Rajan Shahi’s serial ‘Ye Rishta Kya Kehlata Hai‘(2009). From the very first day till now, viewers prases the girl for her performance in the show. She played the character of ‘Akshara Singhania’. Within a short span of time, the sanskari bahu won the heart of the audience.

This long-running show has already completed its 1800+ episodes. After working for continuous 8 years, the girl decided to quit the show in 2016. The reason was that she wanted to focus on other projects. After this in the year 2017, she participated in the colors TV adventure show ‘Fear Factor: Khatron Ke Khiladi 8′ as a contestant. She was 1st runner-up in the show. Next, she was seen in India’s popular show ‘Big Boss 8‘ as a celebrity contestant. Again she was 1st runner-up in the show. The actress was known for her controversial fights with another participant named ‘Shilpa Shinde’.

In March 2018, she appeared in a Punjabi music video with Sonu Thukral. Looking forward to her digital debut, she signed Ankoosh Bhatt’s short film ‘SmartPhone‘. She was cast against actor Kunaal Roy Kapur.

Once again in July 2018, she was seen in Sonu Thukral’s Punjabi video ‘Bhasoodi‘. Also, she was offered the role of Komolika (iconic vamp role) in ‘Kasauti Zindagi Ki‘. In the same year, Hina signed her debut movie ‘Lines‘ opposite actress Farida Jalal.

Also, at the beginning of this year i.e 2nd Jan 2019, she signed another short film ‘Soulmate‘.

The actress belongs to a middle-class conservative Muslim family. Hena’s mom is from Srinagar and her dad is from Bombay. Aamir Khan is her younger brother. He is the owner of the travel agency company. She loves singing songs with her brother. He is among her main fans and supporter. The girl is very close to her family and considers it as per first priority.

Karan Mehra (her co-star in the YRKKH serial) left the show due to health problems in June 2006. Following this, her wife shared an emotional message on the Internet describing her husband’s commitment to the show. There were talks around everywhere about how he didn’t get well along with her co-actress Hina (her on-screen wife).

For her behavior in Big Boss, she got trolled many times. Her close friends and boyfriend Rocky supported her during the slow journey. Gifted with beauty and brain, Hina Khan left no stone unturned to make it big in the small screen industry.

Also Check Out: Dipika Kakar Net worth and Biography

Talking about her love life, she is dating Rocky Jaiswal a.k.a Jayant Jaiswal since 2014. He is Supervising Producer of the Tv serial ‘Ye Rishta Kya Kehlata Hai’. Rumors are that very soon they will get married. She is happy with her relationship and often shares a pic with her bf on social media. However, she doesn’t openly speak about her relationship with Rocky.

The girl is 5’4′ tall and has a weight of 50 kg only. Gone are the days when she was a bit overweight, now she looks awesome and has a well-toned body. The dark brown color of her eyes, black color hair add more to the beauty and grace of this Indian girl. Her body measurements are like this: 34-28-34. Well, Hina also gets an appreciation for her dressing sense. She loves doing experiments with her looks.

Also Check Out: Nutan Net worth