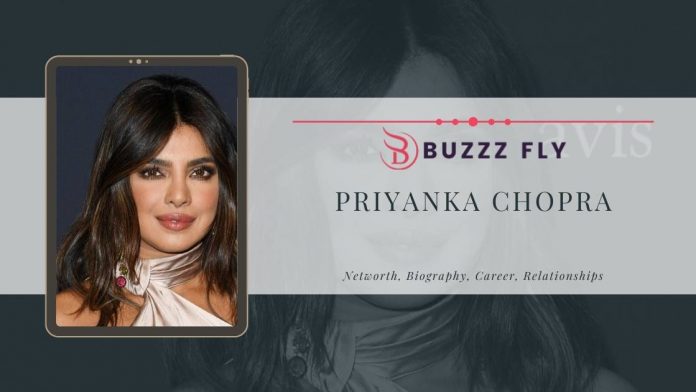 Priyanka Chopra Net Worth: This gorgeous girl is the first child of Madhu Chopra and Ashok Chopra. Born on 18 July 1982, she is a part of Hindu family. Bareilly (UP) is her hometown. As both her mom and dad were in the job so they often got transferred to other cities. Thus, the actress spent her childhood in several cities like Delhi, Chandigarh, Ambala, Ladakh, Lucknow, Pune, and Bareilly. Her close people call her by names like PC, Piggy Chops, Mimi and Sunshine.

Winner of Miss World contest (2000), Priyanka Chopra Jonas is one of the leading personalities of Indian cinema. She is an actress, singer, film producer, and a philanthropist. It’s a result of her hard work and patience that she has earned worldwide popularity.   The young and beautiful Priyanka is also among India’s highest-paid actresses.

Because of her parent’s job, they were relocated to various places. But she didn’t find it difficult to travel and change school. In fact, she enjoyed getting new experiences and to know about the different cultures of India. La Martiniere Girls’ School (Lucknow) and St. Maria Goretti College (Bareilly) are among the schools that she was a part of.

When she was 13 years old, she moved to the US. There, she lived with her aunt and enrolled in schools like Newton (Massachusetts) and John F. Kennedy High School, Cedar Rapids, (Lowa). That time she loves to participate in various theatre productions. Also, she learned Western classical music, choral singing, and Kathak dance there.

After residing there for 3 years, she came back to India and finished her studies at Army School (Bareilly). For her graduation degree, she chose Jai Hind College (Mumbai).

Earlier, she wished to become an aeronautical engineer. After winning the title of “Miss World” in 2000, she started receiving offers for movies. Anil Sharma’s “The Hero: Love Story of a Spy” in 2003 was debut movie of Chopra. She worked with Sunny Deol and Preity Zinta. In the same year, she appeared in Raj Kanwar’s movie “Andaaz” with superstar Akshay Kumar. The movie earned positive feedback from the audience.

Next year i.e 2004, her 3 movies named “Plan”, “Kismat“, and “Asambhav” were released. But sadly the movies didn’t perform well. After this, she was cast in David Dhawan’s romantic comedy “Mujhse Shaadi Karogi“. This movie was a big hit and earned great revenue. Salman Khan and Akshay Kumar were her co-actors in the movie. Next, she appeared in Abbas-Mustan’s thriller drama “Aitraaz” with Akshay Kumar and Kareena Kapoor. She received appreciation from critics for her role in the movie.

Also Check Out: Kareena Kapoor Net Worth in 2022, Career, Biography

* Best Performance in a Negative Role for movie ‘Aitraaz’ (2004)

Priyanka’s family is simple and middle class. Her parents served as physicians in the Indian army. His father was Punjabi Hindu who belongs from Ambala city (Punjab) whereas her mother belongs from Jharkhand. She has one bro named Siddharth Chopra. He is an entrepreneur and is 7 years younger than her sister  Actresses Parineeti Chopra, Meera Chopra, and MannaraChopra are her cousin sisters.

A former member of Bihar Legislative Assembly, late Smt. Madhu Jyotsna Akhouri was her maternal grandmother and Dr. Manohar Kishan Akhouri, a former Congress veteran is her maternal grandfather. PC is very attached to her family, especially her dad. Unfortunately, he passed away in June 2013 because of cancer. Even she had a tattoo as “Daddy’s Lil girl” in 2012.

Priyanka and Akshay Kumar decided not to work together after the movie “Waqt: The Race Against Time” (2005). It was because there were rumors of their affair.  Rumors of affair of PC and Shahrukh Khan somewhere disturbed the actor’s personal life.  As his wife, Gauri Khan felt frustrated on incidents like Priyanka’s regular visit to their home, special treatment given to her by Shahrukh.

Later, she asked her husband to stop working with her.  Also, there is one controversy related to the episode of American TV show “Quantico“. It’s a matter of June 2018 when she played the role of an anti-terrorist officer in a serial.

The hot and stunning Priyanka is very cautious about her looks. She follows a strict diet plan and regular exercise. Everyone admires her beauty and appealing personality. She has a height of 5’7′.  Being a fitness lover, she carries only 55 kg of weight. Well, this style icon has dark brown eyes and black hairs.

Coming to her love life then she was committed to model Aseem Merchant several years ago. Also, her name was linked with actors like Harman Baveja, Shah Rukh Khan, Akshay Kumar, Shahid Kapoor. Early in the year 2018, the news was heard of her relations with Nick Jonas.  He is an actor and musician by profession. They were spotted together in several locations.

Things became more clear when the American boy joined the actress during his trip to India. Giving a name to their relationship, the couple got engaged on 18 August 2018 in Mumbai (Maharastra). Later, on 2nd December 2018, they tied the knot at Umaid Bhawan Palace (Jodhpur). Both Hindu and Christian rituals were performed.

Some Unknown Facts About Mrs. Jonas:

This proud Indian lady has made every effort to reach this stage of popularity. She is a notable, self-confident and eminent person of the glamour world.