Nothing compares to leaving on a tranquil camping vacation in the bush. However, protecting one’s food from the surrounding wildlife might be challenging, depending on where one is. Particularly concerning bears. Bears can detect odors through Ziploc bags.

This is due to the flimsy plastic of the bags’ weak walls, making it easy for fragrance particles to escape, as well as the fact that bears have one of the strongest olfactory senses in the whole animal kingdom. Don’t depend on Ziploc bags to mask the scent of the meals when in bear territory.

One of the best methods to properly safeguard the foodstuff when hiking is to store it in a bear canister. If one is planning to buy one good quality canister for their trip, visit this site. At most, a bear will engage with the container and become bored when it finds it can’t break it; the bear canister is intended to keep bears from getting to the food. The theory is that bears won’t consider investigating canisters once they realize they don’t make for an accessible feast.

Why Does The Smell Permeate Through The Plastic And Not Stay Trapped? 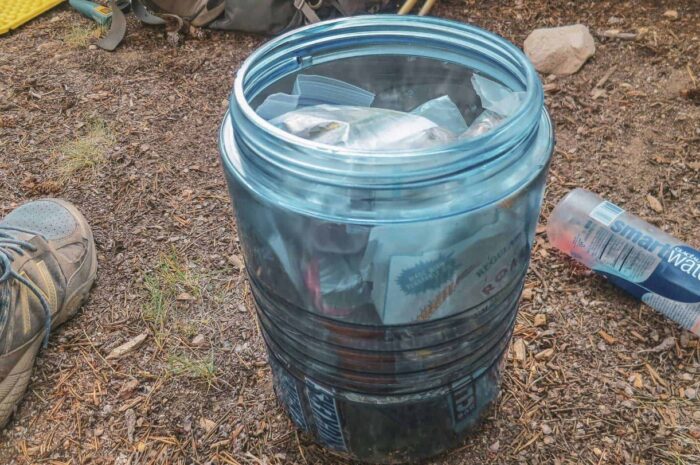 The desired aspect of eating items is their smell. A food item’s quality is determined by its characteristic fragrance, which is brought on by its natural or additional components. Glass and metal canisters are completely impermeable and do not permit even the smallest particles that cause odors to pass through the jar walls. Everyone knows that paper is porous and cannot be relied upon to retain the scent of the goods it contains.

Likewise, all plastics are permeable to some tiny molecules at the subatomic scale.

Essentially, this is referred to as permeability toward tiny molecules. Depending on their biochemical makeup, various plastics have varied permeability ratings. As a result, the scent of a certain product may be detectable outside of a bag made of a particular kind of film.

How Are Bears Able To Smell Food From Very Long Distances Even If It Is Kept In Ziploc Bags?

The distance a black bear can sniff anything is readily estimated in kilometers. It is evident from a black bear’s face that they have a huge snout. The nasal mucosa, which is the region within a black bear’s snout, is 100 times bigger than humans. This big nose produces a great sense of scent! Black bears have a stronger sense of smell than bloodhounds, which are used to find persons who have vanished.

Because it is so acute, a black bear’s perception of odor is challenging to quantify. Bears are often regarded as having the best ability to smell in the wildlife world, and they estimate how wide-ranging this sense can vary significantly.

It’s astonishing how much stuff one can pack into a canister with careful organization and preparation. An individual may make the most of the space in a canister by selecting and repackaging the right ingredients. Although it requires some time and work, the outcomes are worthwhile.

When utilizing a canister, remember that all fragrant objects, including meals, toiletries, and trash, must fit within the container the whole time.

The following are the salient benefits provided by bear canisters:

• Hikers will be less anxious about their food while hiking, and they can keep their cool while on the trip.

• Travelers would not have to bother about how they would store their food during the hike due to the bears. They can be more relaxed and enjoy the journey.

• One would not have to cancel a trip in the middle because a bear came and ate all the food.

• If the hikers are tired, they are free to camp anywhere without any fear.

How To Stay Safe And Aware Of Bears While Hiking

Even though most bears attempt to stay away from the people that wander about their neighborhood, every time someone goes on an expedition into bear territory, one runs the risk of running across a bear. Although bears are inherently frightened of people, as the boundaries between the two species blur, bears become less timid around us.

Here are some useful tips one should know:

1. Try To Make A Lot Of Commotion And Noise:

To prevent surprising a bear, make plenty of commotion by conversing, clapping, and singing. If a bear senses a circus would soon ascend the hill, he is unlikely to wait on the route. Contrary to what one may have thought, more than relying on bear chimes may be required to warn a bear of their existence.

Red pepper compounds used in bear spray harm the nasal passages and eyes. It can impair respiration and vision if the breeze pushes it in their direction and is intended to deter an approaching bear. It drains in about 7 to 9 seconds. In 98 percent of the cases, it stops human casualties during a bear assault at a range of 12 to 30 feet. Not in one’s bag (not even in an exterior mesh pocket—it may get knocked out), but immediately on one’s body in a holster.

3. Remain Calm If Confronted By A Bear

Remain composed and keep in mind that most bears wish to be left free; they rarely seek to attack. Bears can fake their route out of a situation by attacking and abruptly turning away. Additionally, bears have been known to bark, yawn, salivate, snarl, snap their teeth, and lay their ears back in a protective manner.

Continue speaking softly to the bear; this will keep someone more composed and won’t come off as menacing to the animal. A shout or abrupt action might start an assault. Never create a high-pitched shriek or animal noises.

4. Never Pretend Dead Until A Bear Has Attacked

Some of the most prominent pieces of advice need to be clarified. But what if a grizzly bear is mauling someone? Lay still, legs apart, and wrap the arms around the neck. Let the bear attack the luggage with all its might. Until it is finished, remain motionless and do not budge. Appearing motionless with a black bear will be easier because they only strike to kill.

One is required to protect the food, frequently in particular ways, by law and basic hiking ethics. It is frequently useless, foolish, and insufficient to guard the food by storing it in the camp or close to the field.

Those with hard sides are the best bear canisters to keep the food safe. For the majority of the path, they are the best option. The issue is that they are large and hefty. Even while someone is advised to pack a canister, specifically in the bear area, it is recognized that there may be places along the path where someone decides not to.

Is It Expensive to Live in New Hampshire?

Problem of Payment Gateway for your WooCommerce Dropshipping Store Resolved

Should I Settle My Personal Injury Case?